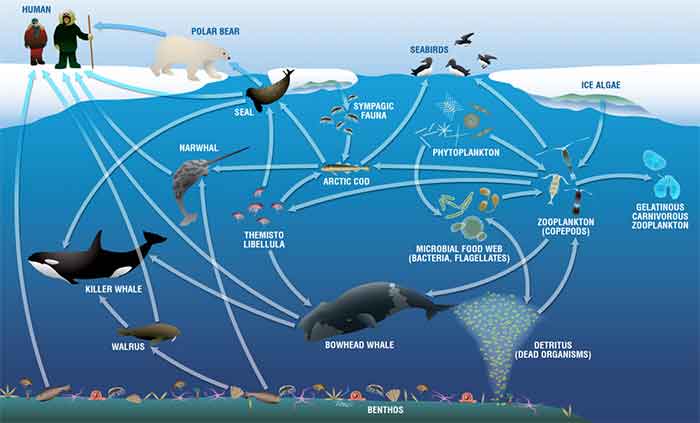 For the first time, a significant loss at the base of the marine food web has been detected. The Scottish Research Vessel Capepod reported the findings in the equatorial waters of the Atlantic Ocean.

At the bottom of the food chain, phytoplankton is usually the most important resource of marine life simply because nothing else eats if phytoplankton doesn’t exist. Additionally, phytoplankton perform photosynthesis, convert sunlight into energy, absorb CO2 and serve as a major source, producing oxygen for the biosphere.

Teams of scientists study plankton and track changes at the base of the food chain. Their findings are reported to various government agencies who will hopefully take corrective action if things go wrong. But, uh…well, let’s continue the story.

It was only recently that disturbing news came from the Scottish research group Global Oceanic Environmental Survey (‘GOES’) in Edinburgh which spent two years collecting plankton samples along the equatorial Atlantic. The team detected unmistakable signs that the food web is compromised: “Their sampling suggested that plankton levels may have dropped by 90% in parts of the Atlantic.” (Source: Expert: Warmer seas are forcing crucial plankton to move north, The Sunday Post, Dundee, Scotland, July 24, 2022)

The GOES research team spent two years collecting water samples from the Atlantic and Caribbean. Previously it was assumed that plankton had fallen by 50% since the 1940s, but this new evidence suggests a drop at the mouth of -90%.

According to the GOES team, plankton are directly impacted by: “An overload of CO2 as well as a deluge of deadly man-made chemicals in cosmetics, plastics, sunscreens, medicines and fertilizers are flooding the marine environment. Everything is toxic to underwater life and once the water reaches a tipping point of activity, large amounts of plankton simply dissolve.(Source: Atlantic Ocean ‘almost dead’, scientist says as plankton wiped outMarine Industry News, July 18, 2022)

GOES research: “The team expected to find up to five visible pieces of plankton in 10 liters of water – but found an average of less than one Conversely, they expected to discover 20 microscopic particles of toxic particles per liter of Atlantic water – but in fact counted between 100 and 1,000. complete annihilation sooner than expected”, Ibid.

In addition to the GOES survey mentioned above in parts of the equatorial Atlantic, another Continuous Plankton Recorder Survey (“CPR”) research team from Plymouth, UK, monitors plankton with ships across the Atlantic and Pacific oceans, up to 30 vessels generating 5,000 samples. per year. The CPR has been monitoring plankton in the North Atlantic for 70 years and reporting the results to governments in the UK, EU and North America.

Preliminary evidence suggests that, in addition to human-influenced chemicals, etc., for the first time, microscopic planktonic sea creatures are reacting negatively to warming ocean water in deep ways. Part of the problem is the changing water temperature conditions needed to support the life cycle of certain species. It seems that the impact of global warming is moving them north as the equatorial waters get too warm. This northward movement by plankton may be acceptable in the short term, but ocean warming will become extremely problematic, as plankton will essentially run out of cooler water space to migrate without overloading its own type in clumps of confused plankton crowding and fighting for the same space. It can become toxic in many ways.

According to David Johns, head of the CPR: “Are we in a situation that urgently requires mitigation? Yes, I would say so. If they continue to move north and run out of water, if the seas get too warm, then we will lose a lot of those types of plankton that are critically important to fish species and marine mammals,” Ibid.

Of course, no one knows for sure if the horrible fall is the result of northward migration due to excessively warm waters or decimation by toxins such as plastics, chemicals and agricultural pesticides/fertilizers. . However, it’s likely a combination of factors, essentially doubling the problem.

The global community should be too preoccupied and too reactive to do whatever it takes as soon as possible! This type of bad news tends to get worse over time. Also, is there a solution fast enough to make a big enough difference in enough time?

The risk is that a loss of plankton brings in its wake a collapse of the ocean food chain. According to Dr Howard Dryden of GOES, a tipping point could come within 25 years unless direct action is taken on toxins from plastics, chemicals and agricultural fertilizers. Yet a big problem is rising temperatures due to climate change/disproportionate global warming due to excess greenhouse gases emitted by humans as well as the extremely negative impact of CO2 on ocean acidification .

As for solutions, according to CPR’s David Johns: “I would definitely focus on reducing CO2.

Which brings out the heartbreaking reality that CO2 emissions are almost guaranteed to continue to rise at the current rate of 10 times the paleoclimate record of the last 66 million years. Umm, 10 times faster! And 66 million years left in the dust.

Here’s why CO2 is destined to continue suffocating the planet: Public announcements of oil and gas production plans guarantee excessive levels of greenhouse gas emissions for years to come: The world’s largest fossil fuel companies are expected to spend nearly $1 trillion on new oil and gas fields by 2030Global Witness and Oil Change International, 12 April 2022. At the same time, China and India have once again rediscovered coal relations.

Moreover, the threat to plankton goes far beyond human-generated greenhouse gases and toxic chemicals. It’s much worse, namely: indeed, scientists have observed zooplankton eating plastic. The micro-plastic looks like food for zooplankton. This horror movie analogue introduces a variety of toxic chemicals into the marine food web. Heaven only knows the end results, maybe 3 eyed fish and many more people with totally fried brains who are easily swayed into believing outright lies. (Source: Plastic pollution is killing plankton. How the loss of this species threatens the oceans, Onegreenplanet.org, 2021)

All of this reminds us if, when and how there is a chance of globally unified corrective policies to prevent the total collapse of marine life. Hmm! That’s a lot to ask, especially when the nations of the world couldn’t even keep up with the Nationally Determined Contributions (NDCs) to the Paris ’15 climate accord. It was a total failure. So what about the oceans?

Robert Hunziker is a writer from Los Angeles

Distribution of the marine food web

Grow phytoplankton to learn more about the ocean’s food web