Disclosure: I’m still relishing a euphoric state induced by Sunny’s Carrello cooking. Maybe it was the velvety texture of homemade semolina pasta. Or the crisp, savory characteristics of their homemade pesto. Or perhaps the balanced crunch of Maldon salt flakes, delicately sprinkled on toasted foccacia bread.

Some central Oregon food carts tend to hibernate during the winter months; it’s cold, it’s snowing and there’s often only outdoor seating. Can you blame them? However, that’s not the case for Sunny’s Carrello, which opened its, er, windows in November. Amy Wright, who co-owns Sunny Yoga Kitchen with his wife, Courtney, trained as a chef in upstate Boston, with Italian cuisine as her foundation. When the opportunity to open a food cart presented itself, casual Italian food was an obvious choice.

It was a bit of serendipity, and some regulations from the Oregon Liquor Control Commission, that led the Wrights to launch the carrello, Italian for “cart”. Beer-brewed cocktails paired with a 100-layer lasagna (yes, there really were 100) were on the menu at a pop-up brunch hosted by Sunny’s and The Ale Apothecary. OLCC rules state that an establishment must offer at least five different “substantial” food items when the place serves alcohol. Catering to hungry customers at The Ale Apothecary would allow the tasting room to serve barrel-aged cocktails, prompting aspiring business partners to make Italian cuisine a permanent fixture at the Century West spot.

Wright has constructed a menu reflecting his early career training and his visits to Italy. She greeted me in her cart an hour before opening and gave me a choice of their best-selling agnolotti—stuffed pasta with cannellini beans, basil pesto, and roasted Brussels sprouts—or the pasta carbonara. I chose the most photo-worthy carbonara for its vibrant yellow coloring from the egg yolk and the natural golden hue of the pasta. While the bacon crisped on the griddle, Wright tossed semolina pasta in egg yolk and cream. 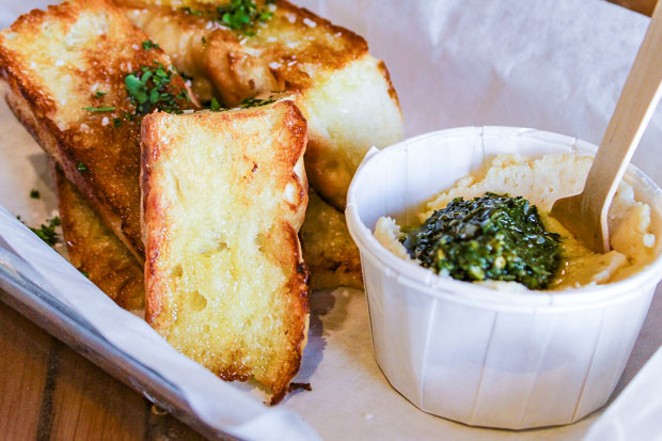 Carbonara traditionally doesn’t include cream, but as Wright explained, “Carbonara can sometimes be served at room temperature – this, of course, to make sure the egg doesn’t scramble. I like the warmth that cream adds to this dish.”

Meanwhile, Wright continued to prepare a antipasto: focaccia served with mashed white beans and pesto. The homemade bread is toasted with olive oil and accompanied by cannellini bean puree, topped with a homemade pesto. Certainly, I would not have ordered this appetizer if I had not seen how beautiful it turned out. As she sprinkled a little Maldon salt on the warm, crispy slices of focaccia, we headed to The Ale Apothecary for the fun part.

The carbonara was tastier than I could have imagined. Pieces of smoked bacon, a sunny side up egg and a creamy egg yolk sauce combine to create a harmonious umami for all taste buds. I would prefer not to dramatize this experience too much, but I almost cried. Moving on to the focaccia plate, the first thing I noticed was the lovely crunch of the coarse salt paired with a vibrant citrus pesto. From there, I understood what people mean when they want time to stand still. 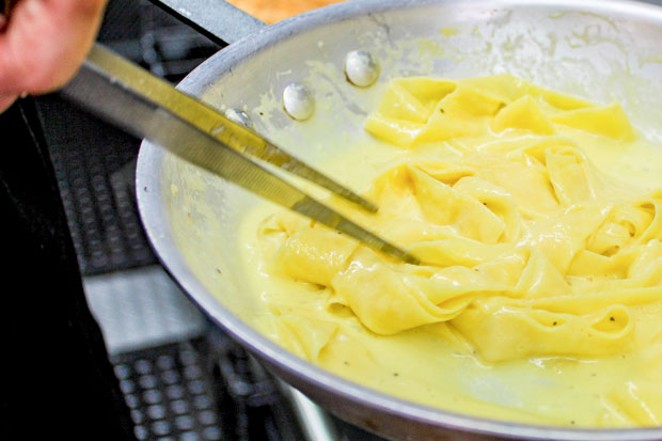 All right, I’m coming to my senses.

The cart can also make things vegan and gluten-free where appropriate.

“We offer many dishes like this at Sunny Yoga Kitchen, so I wanted to stay in line with that for our current customers,” says Wright. Not to mention, you will no doubt be greeted by Amy’s infectious smile and enthusiasm when you arrive.